My daughters are young – elementary and preschool aged. So when they heard I had written a book and we were going to be able to have a physical copy, they immediately demanded to know who the characters were, what they looked like, what they wore, etc., 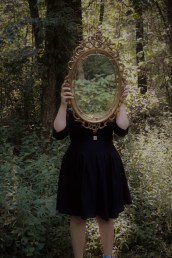 Children are visually stimulated at that age. That’s why I’m in awe of picture book authors and illustrators because they’re so good at creating brilliant imagery through words and pictures that help you see exactly what they were seeing in their minds when they were crafting their stories.

So when my five-year-old asked me for the umpteenth time what “Amelia,” the main character in The Darkest Current, looked like, I had to pause for a second. Then, ashamedly, I had to go back to my manuscript and look up how I described her.

It’s not that I had forgotten, or couldn’t see her vividly in my mind. It’s just when I went to answer my daughter, I realized that in my brain, Amelia looked just like me. But then again, so did her sister Adele, and their friend, Devon (who is a guy). Embarassingly… in my mind’s eye, all the characters are basically… me.

Of course, I didn’t describe them that way when I was writing the book. They all have distinguishing features. Admittedly, Amelia does look the most like me because she has long, dark hair. But Adele has blonde hair and blue eyes. That’s 100% NOT what I look like. But… I created her, and thus, she is reflective of me in many ways. Even the villain of the story personifies many character traits of myself, albeit those that I’m not necessarily proud of, because… villains.

Writers are artists in that they create a world in their heads and then attempt to lay that down on paper effectively. I’ve heard many an author say that they write because they have these stories billowing up in their minds that NEED to be told and they can’t rest until they’ve alleviated that urgency. 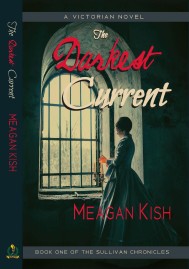 Writing is a labor of love. And time. And persistence.  You spend so much time in the world of your characters, you feel as if they’re real tangible people that you might bump into on the street in your neighborhood or in your favorite cafe. But good writers also write what they know, and who do you know better than yourself?

So, when you read The Darkest Current, now you know how I came up with the characters. They’re each just a little piece of me.

Get your copy of The Darkest Current.

The Darkest Current is also available at Lawren’s Gift Shop in Huntsville, Alabama.

2 thoughts on “A Little Piece of Me”